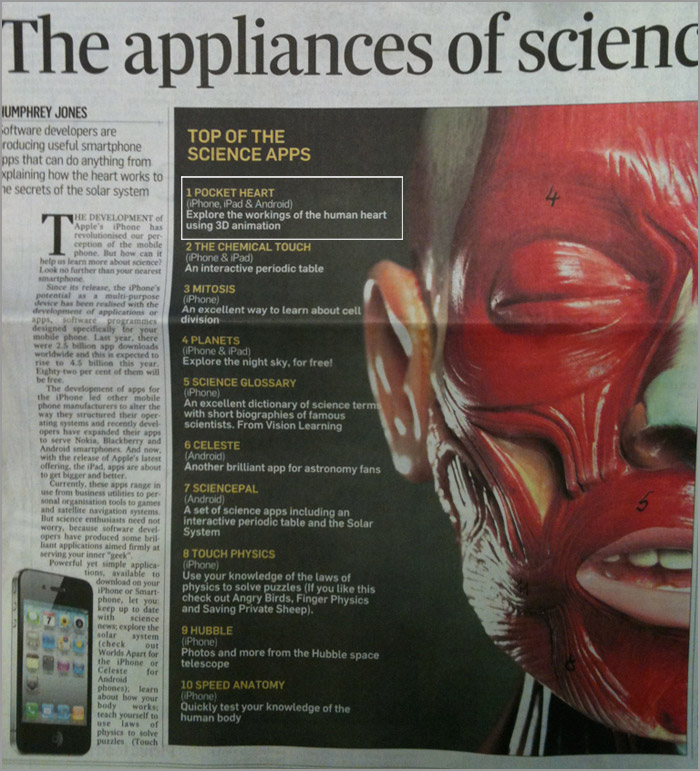 Software developers are producing useful smartphone apps that can do anything from explaining how the heart works to the secrets of the solar system, writes HUMPHREY JONES.

THE DEVELOPMENT of Apple’s iPhone has revolutionised our perception of the mobile phone. But how can it help us learn more about science? Look no further than your nearest smartphone.

Since its release, the iPhone’s potential as a multi-purpose device has been realised with the development of applications or apps, software programmes designed specifically for your mobile phone. Last year, there were 2.5 billion app downloads worldwide and this is expected to rise to 4.5 billion this year. Eighty-two per cent of them will be free.

The development of apps for the iPhone led other mobile phone manufacturers to alter the way they structured their operating systems and recently developers have expanded their apps to serve Nokia, Blackberry and Android smartphones. And now, with the release of Apple’s latest offering, the iPad, apps are about to get bigger and better.

Currently, these apps range in use from business utilities to personal organisation tools to games and satellite navigation systems. But science enthusiasts need not worry, because software developers have produced some brilliant applications aimed firmly at serving your inner “geek”.

Powerful yet simple applications, available to download on your iPhone or Smartphone, let you: keep up to date with science news; explore the solar system (check out Worlds Apart for the iPhone or Celeste for Android phones); learn about how your body works; teach yourself to use laws of physics to solve puzzles (Touch Physics for the iPhone is one of my favourites) or find out more about sub-atomic particles (Particle Zoo, also on the iPhone, makes complex physics easy).

Many of these apps are free or cost a nominal fee. Currently, most of the better science-related apps have been designed for the iPhone and iPad, but Android, Nokia’s Ovi store and other platforms could catch up soon. The iTunes store currently has approximately 10,000 apps for science and medicine.

The potential for science teaching and learning is also significant. Many primary and secondary schools are currently using these devices in their classrooms and to good effect. With the arrival of the iPad over the coming months, this potential could be further cultivated.

Danuta Gray, chief executive of O2 Ireland, believes the iPhone, its apps and the impending iPad, have considerable potential in science education.

“iPhones, iPads and the apps developed for them show how intuitive and natural accessing and using the internet can be. It’s how our children absorb information, so using them in education is the natural next step,” she says.

“Anything that helps to engage children and develop their interest in science and technology is fantastic and is to be applauded.”

There are also apps designed as complex reference tools, for science professionals or students of medicine, biochemistry or astrophysics. One Galway software company, eMedia, has developed an excellent app for the iPhone and iPod Touch called Pocket Heart, which uses 3D animation to show the inner workings of the human heart and our circulatory system.

“Pocket Heart is primarily aimed at Leaving Certificate biology students, as an educational tool, enabling them to visualise the complex inner workings of the human heart,” says Mark Campbell, founder of eMedia.

Whether you are a fan of mobile technologies or not, apps such as Pocket Heart are making science more accessible to individuals of all ages, and that must surely be a positive thing.

Humphrey Jones is a teacher of biology and science in St Columba’s College, Dublin. He also edits and maintains The Frog Blog, a website aimed at science enthusiasts of all ages: frogblog.ie

Top Of The Science Apps:

3 MITOSIS
(iPhone)
An excellent way to learn about cell division

8 TOUCH PHYSICS
(iPhone)
Use your knowledge of the laws of physics to solve puzzles (If you like this check out Angry Birds, Finger Physics and Saving Private Sheep).

9 HUBBLE
(iPhone)
Photos and more from the Hubble space telescope

How an App Could Cure Your Fear of Hospitals (Pocket Body gets ‘Character Approved!’) 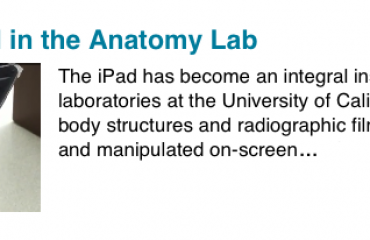 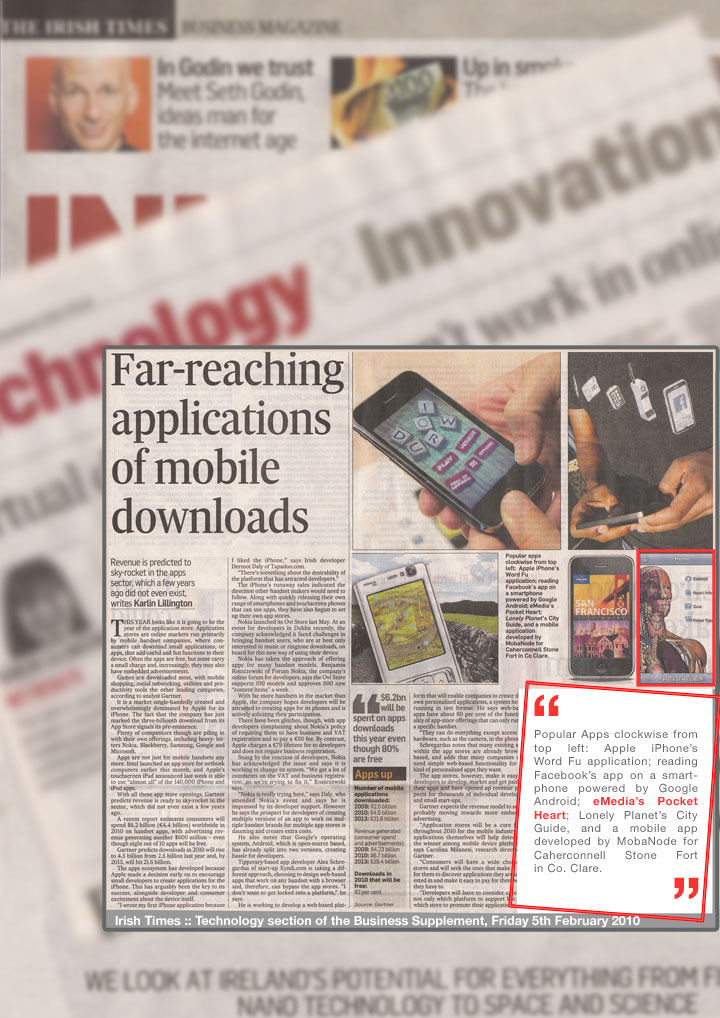