Many thanks to the judges and organisers of this year’s Appy’s Awards, and congratulations to all of the other developer teams, whose apps featured at the event. We are delighted to have won ‘Best Medical App’.

Over 200 people attended the inaugural awards show at the Gibson Hotel, Point Village, Dublin 1. Des Doris, founder/organiser of the Appys said each app entered was judged on seven different attributes including design, relevance to target market, utility and innovation. “We’ve been really impressed with the standard of entries for such a young media sector, and the app sector is a media sector in its own right now. While this year we’ve concentrated on mobile apps, next year we’d like to see tablet apps, social media apps and even Web TV apps entered. The app sector is changing the media landscape and the way many companies do business.”

Irish Times names Pocket Heart as Download of the week! 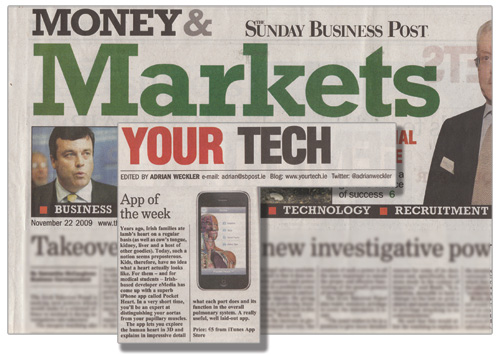